Performance in a Posthuman Age and The Circus of Freaks 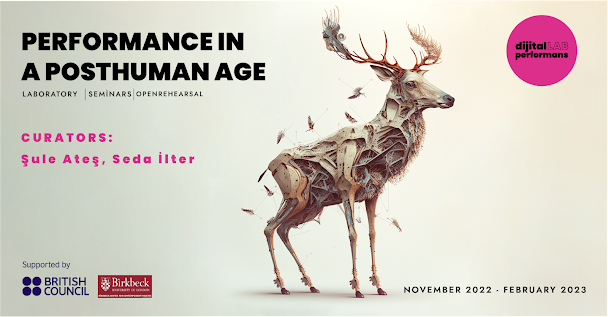 Performance in a Posthuman Age and The Circus of Freaks is the second research project of digitalLABperformans. The project posits the theories of ecocriticism and ecofeminism in the context of posthuman and focuses on the intersection of these theories and theatre and performance art.

The project is supported by the British Council Creative Collaborations Grant Program and started with a four-month dramaturgy laboratory in November 2022, will share the outputs of the laboratory process with the public through seminars and open rehearsals in January and February.

Two open rehearsal presentations which include dramaturgy laboratory outputs and eight different seminars will be shared with the audience within the scope of the project, which is conducted with the partnership of Şule Ateş (Dijitallabperformans) and Seda İlter (Birkbeck Center for Contemporary Theater). The physical activities of the program will be held in Salt Galata as part of Salt's Open Rehearsals program.

Posthumanism is a critical theory that attracts great attention in the fields of technology and environmental science, especially in literature, philosophy, and media in the last three decades. It rejects Western Humanism which centers on European, educated, white males, and questions the notion of humans and their relationship with nature. It criticizes the conventional borders between humans, animals, technology, and nature and put forth a non-hierarchical, environmentalist, and peaceable perspective. Performance in a Posthuman Age aims to raise awareness of this new value system by creating an international artistic ground for posthuman knowledge to be associated with the performing arts.

The Freaks Circus Dramaturgy Laboratory focuses on the iconic gothic characters of posthuman literature, Shakespeare's supernatural heroes, and the "monsters" of Anatolian geography, inspired by ecofeminist thinker Donna Haraway's images of cyborgs, freaks, and monsters. Within the scope of the workshop, texts on mythological and literary characters such as Shahmaran, Medusa, Cyclop, Lilith, White Lady, Werewolf, Elf, Leprykon, and Caliban are reinterpreted in the context of ecocriticism and ecofeminism with actors and written. The director Sule Ates carries out this dramaturgy laboratory with dramaturgists Eylem Ejder and Miran Bulut.

The visuals of the project have been designed via Midjourney. 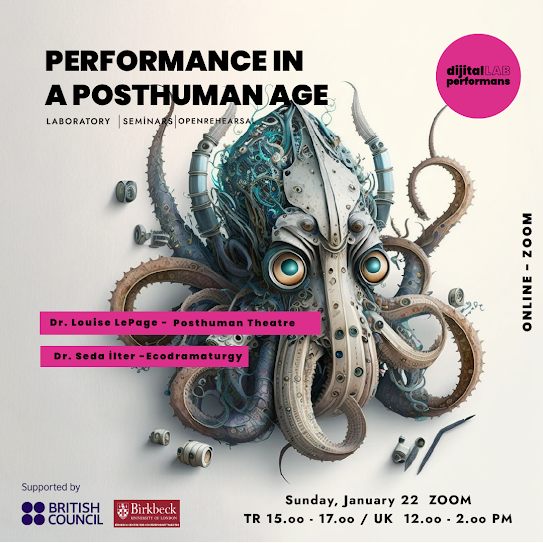 (The event is in English, simultaneous translation will take part)

You can use the form below to register:

Theatre is, conventionally, humanist: it is by humans, for humans, about humans. Offering an anthropocentric view of the world, theatre posits the human character centre stage and continues, in its most common and popular forms, to operate according to Aristotelian forms and structures.

However, the human is evolving with technology, rendering traditional ‘others’ - the machine, animals, and the supernatural - intimately bound up with the human form. Borders are blurred. Meanwhile, humans have been decentred by scientists and philosophers such as Darwin, Marx, Freud, and, more recently, advanced capitalism, science, technology, and climate change. Such decentring has acted, and continues to act, to put increasing pressure on conventional notions about the human body – psychically, conceptually, socially, and physically – as well as the human’s relationship with space and time.

Theatre is an art form by humans about the human condition so as the human and their world changes, so does their theatre. This talk will start to map some of the striking ways this change is happening as it identifies and examines posthuman qualities relating to such dramaturgical elements as character, unity, proportionality, space, action, time, the uncanny, atmosphere, and objects.

As part of this talk, I will share some examples of theatre that exemplify some of these posthuman qualities.

Dr. Louise LePage is Senior Lecturer and Programme Leader of the UG BA in Theatre at the University of York. She is currently writing a monograph, Posthuman Theatre, for Palgrave, and has published most recently on robot characters and performers.

What is ecodramaturgy and how does ecodramaturgical thinking/practice can resist dominant anthropocentric modes of representation?

This talk considers how theatre and performance have engaged with ecological thinking, and embodied, presented, and responded to climate crisis. We will discuss the ways in which theatre and performance can problematise dominant anthropocentric modes of representation and reveal the inequalities that white environmentalism has intensified. We will explore the idea and practice of ecodramaturgies as an intersectional one and consider ecodramaturgical thinking in terms of race, class, gender, social mobility, etc.

Dr Seda Ilter is a senior lecturer in Theatre and Performance Studies at Birkbeck College, University of London. She is the Programme Director for MA Dramaturgy. Her research interests include theoretical and aesthetic implications of technology and media culture in theatre, dramaturgy and new writing. Seda is also interested in translating and directing. She directed Tim Crouch’s The Author in Istanbul (2015). Seda’s monograph Mediatized Dramaturgy: Evolution of Playtexts in the Media Age was published by Bloomsbury in August, 2021. 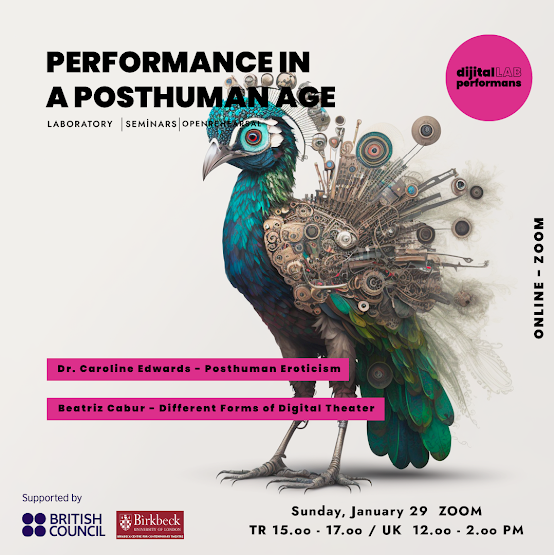 (The event is in English, simultaneous translation will take part)

You can use the form below to register:

This talk explores the mixed media collages and sculptures of the Kenyan-born artist Wangechi Mutu. Mutu is known for her violent, unnerving juxtapositions of human, animal, vegetal, and mycelial forms into arresting hybrids. In these works, the Black female body is repeatedly ripped apart and reassembled within fantasy landscapes that speak of death and decomposition but also of regenerative regrowth. Critics liken her use of collage to the grotesque hybridity of Octavia Butler’s aliens in the Xenogenesis trilogy or Mary Shelley’s Creature, sutured by Dr Victor Frankenstein out of multiple exhumed corpses from Bavarian graveyards.

I will suggest that Mutu’s work helps us imagine what the utopian possibilities of the inhuman might look like within the context of environmental collapse and what Sarah E. McFarland calls “cultures of human extinction.” Her use of the grotesque, fecund eroticism of human/nonhuman encounter is particularly relevant. In Mutu’s diptych Yo Mama (2003), for example, the recumbent figure of Eve perches amongst veldt-like grasses. Legs splayed in a deliberately sexualised manner, she supports the weight of a phallically elongated snake with deliberately biblical connotations, whilst oversized fungal spores wobble about behind her like alien spermatozoa. In her “Hybrid” series, women lean against tree trunks, flickering into avian and vegetal forms, sprouting fluid tendrils and pecking at each other in what might be aggressive foreplay or predatory kill.

These more-than-human forms writhe and explode in unnatural congress, limbs splaying like mycelium, complex root systems penetrating them until they explode into Whitmanesque multitudes. The fungibility of the Black female body in Mutu’s works performs a forceful critique of the way in which Black bodies have been denied full humanity, in a racist process of dehumanisation that began with G. W. F. Hegel. In recalling this history of dehumanisation, Mutu’s human-arboreal and human-mycological works reclaim a nonhuman, or more-than-human subjectivity in a powerful political gesture akin to what Sylvia Wynter describes as Black counterpoetics.

Dr. Caroline Edwards is Senior Lecturer in Modern & Contemporary Literature at Birkbeck, University of London where she is Director of the Centre for Contemporary Literature. She is author of Utopia and the Contemporary British Novel (2019), co-editor of China Miéville: Critical Essays (2015) and Maggie Gee: Critical Essays (2015) and editor of The Cambridge Companion to British Utopian Literature and Culture, 1945-2020. Caroline’s research has featured in the New Statesman, the Guardian, SFX Magazine, BBC Radio 4, BBC Radio 3, and BBC One. She is currently writing her second monograph, Hopeful Inhumanism: The Elemental Aesthetics of Ecocatastrophe, which examines strangely hopeful moments of inhuman collaboration within elemental contexts.

What are we talking about when we say: “Digital Theatre”?

We will walk through the concepts that were established before the pandemic and how they shifted and exploded into a myriad of options during and after it. So, what are the different forms of "Digital Theatre" now and how are they called?

I will show examples of these forms, and then we will expand on how to approach them as creators and as audiences through an open discussion.

In the last part of this talk, I will give them tools and software to create with and we will talk about how to use them best in their specific practices.

Beatriz Cabur is an awarded, innovative, and multi-faceted theatre professional who started he career in the year 2000 as a theatre director and playwright. She has written and directed over forty theatre plays in Spain, Mexico, Italy, Austria, the UK and the USA. In 2012 she started working in digital and online theatre, directing and creating plays for twitch, tiktok, zoom, facebook, twitter, skype and livestream channels. In 2020 she started teaching how to make Digital Theatre in several universities around the world and how to teach GenZs to make Digital Artivism.

16.00 - Miran Bulut - Physical and Technological Intersections in Performing Arts in the Context of Posthuman 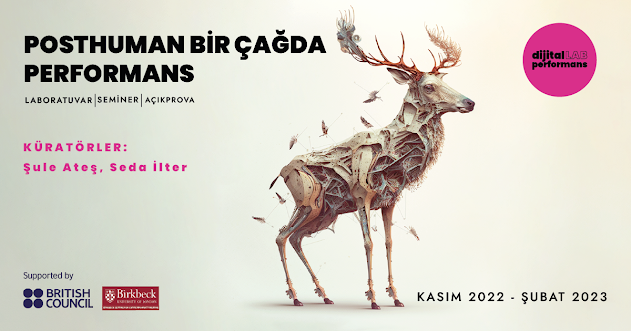